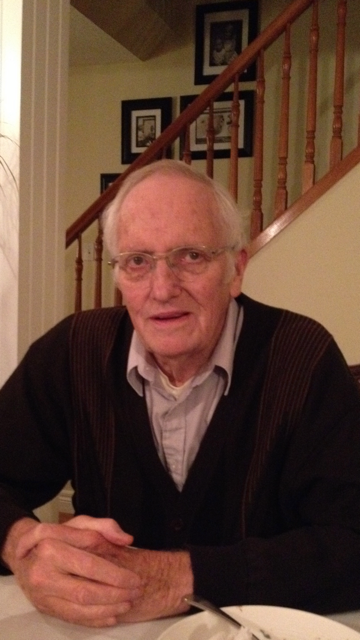 Please share a memory of Edward to include in a keepsake book for family and friends.
View Tribute Book
Edward Nelson Hewer of Dorchester, Ontario passed away unexpectedly at Victoria Hospital on November 16, 2020 at the age of 87. Edward is survived by his loving wife of 52 years Mary Anne (Sangster) Hewer; his children Tracie (Robert) Cavanagh and Tara Lynn (Richard) Paton and his grandchildren Kayla, Mackenzie, Hailey, Jenna and Lauren. There was something special about Ed as first realized when a picture of him and his dog, Tinker, was featured in the local newspaper the Birmingham Eccentric when he was four years old. His time in the U.S. was cut short with the untimely death of his dad, Harry Hewer, in 1940. He returned to Canada with his mother, Maud Hewer nee. Minshall (d. 1996) to reside in Delmer, Ontario. Ed had a long career of 35 years with GSW of London which followed by many years of part time work in various capacities. He always said the key to a long life is "just keep on moving." That special glint in his eye that was first noticed all those years ago in Birmingham was evident every day of his life and in all of his relationships until God called him home to enjoy his eternal life. Ed made friends and brought so many smiles and laughs to all of those that he touched along his way. Ed will be remembered for his laughter, sense of humour and story telling. You may have heard his stories more than once but they were always worth a second, third...or many more re-hearings. He did manage somehow, in his final hours, to leave us with a few new special stories to comfort us when he would no longer be here to retell his old ones. Ed had that unquantifiable quality about himself that made everyone enjoy being around him. He will be deeply missed by his friends, family and all that knew him. Godspeed! The family would especially like to thank Arnold, Justina and all the staff on floor B9 at Victoria Hospital for their incredible comfort and kindness. Cremation has taken place. A private family graveside service will be held at the Delmer Cemetery, Delmer, Ontario. Memorial contributions to the Heart and Stroke Foundation, London Area Office, 180-633 Colborne Street, London, ON N6B 2V3 or to the Humane Society of London & Middlesex, 624 Clarke Road, London, ON N5V 3K5 would be appreciated. Online condolences may be made at www.biemanfuneralhome.com (Bieman Funeral Home, 3970 Hamilton Road, Dorchester, ON N0L 1G2 - (519)-268-7672 - in charge of arrangements)
To plant a beautiful memorial tree in memory of Edward Hewer, please visit our Tree Store

Look inside to read what others have shared
Family and friends are coming together online to create a special keepsake. Every memory left on the online obituary will be automatically included in this book.
View Tribute Book
Share Your Memory of
Edward
Upload Your Memory View All Memories
Be the first to upload a memory!
Share A Memory
Plant a Tree